We are a chef-driven restaurant. Our passion for food and fine dining comes first for our guests. We invite you to join us for an unforgettable culinary experience. 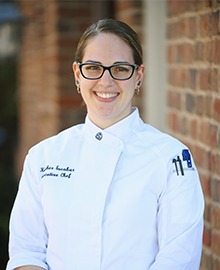 Heather Escobar, executive chef of Hudson 29 New Albany, joined the Cameron Mitchell Restaurants (CMR) family in 2014 as a line cook at Hudson 29 Upper Arlington. Prior to working with CMR, Escobar attended the Columbus Culinary Institute where she met instructors who encouraged and inspired her. She then refined her skills as a line cook and sous chef at Brookside Golf & Country Club before transitioning to Hudson 29. After a year at the Upper Arlington location, Escobar moved to the New Albany restaurant as a sous chef before being promoted to her current position.

Cooking has always been a large aspect of Escobar’s life. Growing up with 10 siblings, she began cooking at 10 years old. Planning and executing one dinner each week became one of her assigned household chores. Escobar would check out cookbooks from her local library and spend hours putting together a menu and preparing the meal, and she loved every moment of it.

Escobar enjoys working for CMR because the teamwork is the best she has ever seen in the industry, and she is proud to be a part of it. She believes the Hudson 29 New Albany team exemplifies the saying, “The whole is greater than the sum of its parts.”

Escobar enjoys any dish where she can incorporate fresh, local ingredients and appreciates CMR’s partnerships with local farms which allow her to be creative while supporting the community.

When asked her advice for aspiring chefs, Escobar said, “If you are willing to put in the time and effort, the sky is the limit for you. It’s not always easy, but it is definitely worth it. If you are truly passionate about what you’re doing, it will show, and amazing things will follow!”

In the kitchen, Escobar can’t live without butter, bacon and smoked paprika, but when she is not cooking, she enjoys gardening, spending time outside with her three-year-old daughter and taking mini road-trips with her family.